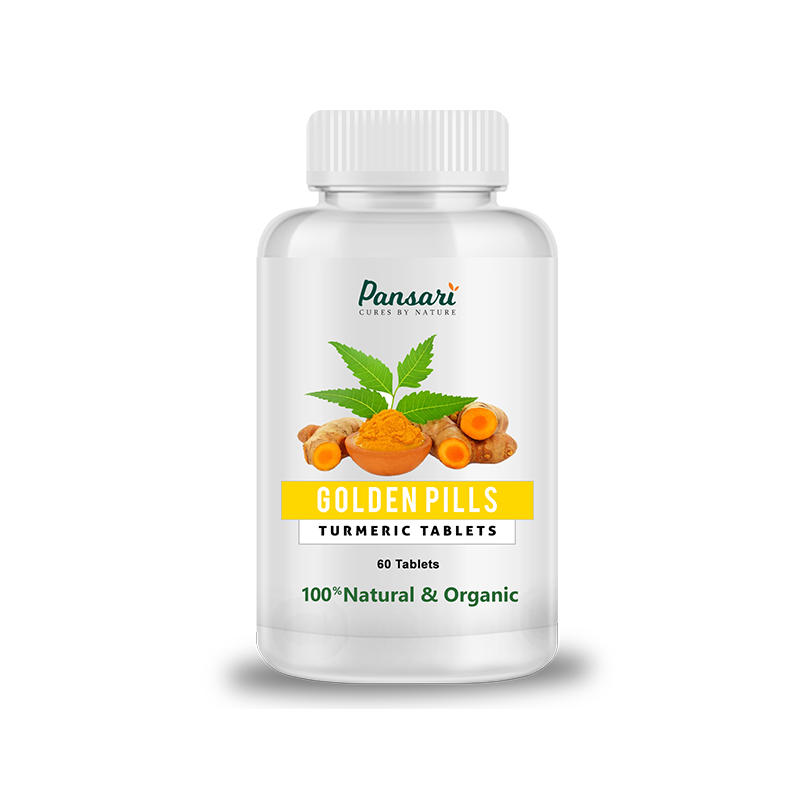 Turmeric – The Golden Wonder Herb - Much More Than Just a Spice!

The magical Golden pills prepared with premium quality turmeric have the ability to beat the conventional medications. We all remember that glass of milk with ‘Haldi’ which was said to be a cure for all the diseases, and yes, it is the truth, the hidden benefits of this golden blessing from nature are way beyond our imaginations.

Turmeric (ہلدی) really does contain compounds with medicinal properties, these compounds are called cuminiods, the most important of which is curcumin. Curcumin, the compound in turmeric responsible for that bright hue, is behind a whole host of the health benefits attributed to the spice. The ability of curcumin is to prevent heart attacks among bypass patients.

Team Pansari is dedicated to introduce organically prepared herbal products to give you the best of your health, yet again it’s a pleasure to announce ‘Pansari’s Golden Pills’ which will help you regain your health.

Since 2000 BC to date turmeric has never lost its importance in any health concern. It is commonly used as an antidepressant, anti aging, anti oxidant, anti inflammatory, moreover it helps cure various kinds of cancers, skin diseases, and the list goes on.

Read along as we introduce the marvellous effects of turmeric on our health and how turmeric is the superhero among all the famously known herbs and medications.

This is a very common practice among almost every part of the world that when you injure yourself internally of externally the best medicine to cure it is the hot drink prepared with turmeric and milk. It has the ability to heal the wounds properly  it can even be used as a topical treatment for wounds turmeric supported collagen synthesis rates, improved wound contraction, and increased tissue strength and cell proliferation around the wound. Turmeric also showed antioxidant properties that helped the healing process.

One of the more widely accepted properties of turmeric is its ability to manage pains.  It has been experimented that various joint pains have been completely cured by the regular use of turmeric specially knee pains. Pains associated with diabetic conditions are cured too.

Turmeric is valuable in helping soothe excess irritation. The swelling response is a healthy and natural mechanism the body uses to usher soothing compounds during times of crises or repair. It’s believed that most people in today’s toxic, stress-laden environment are under constant pressure and the tissue in their body is irritated, the soothing effect of turmeric is likely exerted through its ability to inhibit enzymes that irritate tissues.

The curcumin found in turmeric acts as a healing agent and helps patients recover from depressive disorders. Curcumin has shown some promise in treating depression.

Depression is also linked to reduced levels of brain-derived neurotrophic factor and a shrinking hippocampus, a brain area with a role in learning and memory. Curcumin boosts BNDF levels, potentially reversing some of these changes. There is also some evidence that curcumin can boost the brain neurotransmitters serotonin and dopamine

Diseases today such as cancer, ulcerative, colitis arthritis, high cholesterol and chronic pain can be the result of inflammation Turmeric’s key to disease reversal may be its ability to keep inflammation at bay.

Turmeric benefits include anti-inflammatory and antioxidant properties that have proven effective in treating skin conditions. Turmeric benefits for skin include speeding up wound healing; calming the pores to decrease acne and acne scarring; and controlling psoriasis flares. It is a very active ingredient in the commonly used ubtans for facial glow and bright complexion.

For lowering blood sugar and reversing insulin resistance, there’s arguably no better natural treatment than adding turmeric into your diet.In addition to correcting the causes of diabetes, curcumin has also been proven to help reverse many of the issues related to insulin resistance and hyperglycemia.

Turmeric can reduce symptoms of indigestion and dyspepsia by promoting the production of bile. Many studies note that turmeric can also relieve gas and bloating. Curcumin, an extract of turmeric, is commonly used in over-the-counter herbal supplements for digestive health.

Golden pills prepared with turmeric can promote heart health in several vital ways. Compounds in turmeric help to lower low-density lipoprotein, or "bad," cholesterol levels and prevent cholesterol from building plaque on blood vessel walls. Turmeric can also prevent platelets from clumping together, which may reduce the risk of blood clots.

Arthritis is a common disorder characterized by joint inflammation. Many studies show that curcumin found in turmeric can help treat symptoms of arthritis and is in some case more effective than anti inflammatory drugs.

A study showed that curcumin can help promote weight loss. The researchers found that the anti-inflammatory properties in curcumin were effective at suppressing the inflammatory processes of obesity, therefore helping to reduce obesity and its adverse health effects.

Diabetics and non-diabetics alike are suffering from a common complication called oxidative stress, which damages the inside of blood vessels. Because of this damage to the arteries, cholesterol begins to build up to patch up the damaged areas, which leads to high levels of LDL cholesterol. Luckily, we can get a control of it by adding turmeric to our diets.

2 tablets daily with water for a month.

There should be a gap of one month before you start the next dosage as turmeric should be taken in moderation and excessive usage should be avoided.

N.B: Usually turmeric does not causes significant side effects or harm to your health but high Doses of turmeric may cause nausea, diarrhea, increased menstrual flow, and uterine contractions in pregnant women.

Warnings: People with liver infections and jaundice should not use this. Pregnant women should not use it. Avoid turmeric if you are suffering from any kind of kidney issues specially kidney stones.